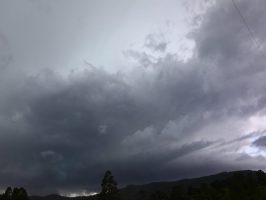 Very tough chase day in terms of terrain! Targetted well with Dungog initially but had to move around to Gloucester for the main supercell of the day! Hiills and mountains and then one wrong road choice to find an opening through the mountains. Then low cloud stopped play!

Headed down to the southern Hunter for the last throw of the dice but the storm fizzled out due to CIN too high and then the monster mess came down. Ended up in Kurri Kurri. 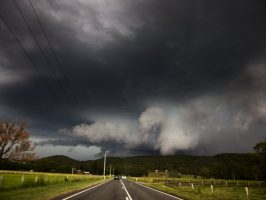 A long chase day today. Headed up to the eastern Hunter Valley had lunch and then the chase was on. First meeting up with Michael Thomas and Tejay. The first cell we intercepted near Dungog was the taster as a second cell developed nearby. This new cell literally developed and organised rather rapidly! It was only a few spots where we could stop to observe this supercell. I must say jaw dropping structure but also awesome contrast up close! This cell showed brief signs of rotation and then must have hit cooler air and weakened becoming elevated near Karuah.

The guys and I became disconnected after this and I intercepted the next cell near Stroud and I backtracked to Bulahdelah for some pretty structure. I ventured up the coast and intercepted another cell that briefly went severe near the coast and weakened.

It was on to Nabiac and Taree. the Taree cell allowed for an understanding of what had been happening during the day. S winds and its associated boundary met the northeast infeed. Although the storm remained elevated it was able to tap into this moist boundary. This storm produced some insane dangerous bolts as the storm intensified and headed towards the coast near or just north of Forster. This was a nasty core with hailstones but I could only see numerous pea sized hailstones. Strong winds and blinding rain with down trees was also a feature of this severe storm.

Strictly Not for Media Use 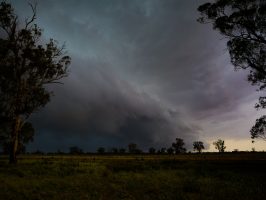 Chased up to Parkes and then gradually got chased back. Overtook the line going through Orange at Bathurst . Got until hail 3 times but nothing sizeable. The rain though was very intense - dangerous conditions both in visibility and hydroplaning potential. And of course an intense mricoburst hit west of Orange near Molong and this put down a branch in front of my vehicle! It blocked the road but I was just able to go around it! Interestingly I had taken the precaution of looking for branches going given the strength of the winds and the tree lined road at that point. I was only about 200 metres within the tree region!