It produced hailstones to at lest 2 to 3 cm in diameter as the storm passed over head on dusk! It also produced beautiful lightning! 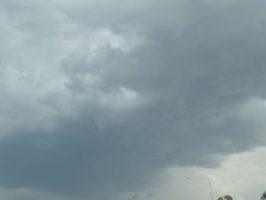 During the afternoon of January 26 2020, my wife and I initiated a storm chase that took us from Blacktown to Colo Heights then back to Parramatta.

A number of small storm cells were observed across outer North West Sydney early to mid afternoon which warranted further investigation. These remained relatively small although as we drove north along Putty Road from Windsor, one cell began to dominate all the other cells. This was fortunate because this was the cell that we were targeting.

We drove directly underneath the cell and parked the car and waited for the rain which hit us. This cell produced a significant downpour and strong winds but no hail. Following its passage, we drove further north to a clearing to observe the cell. This storm cell produced a microburst further east prior to the storm going into decline.

Another thunderstorm cell was observed to the west and while photos were taken it had a shorter life span and was not as strong as the first storm.

The storm intensified significantly as we drove further south east towards it. I was driving while my wife, Katya was taking the necessary photos. This storm produced a sizeable rain free base that was quite low and had interesting structure including strong updraft towers.

This storm produced in the Parramatta area, significant and damaging winds, even a microburst and small hail up to approximately 1 cm in size and significant heavy rain. Small branches were snapped off trees by the combined force of the wind, hail and rain.

Following this event, the storm went into sharp decline and 1 hour later there was little evidence of this this event other than remnant anvil cloud.

This marked the conclusion of a solid storm chase in which two strong storms were intercepted and a third cell being documented close to our position.

The images to support this post are taken by my wife Katya and myself as we took turns to take photos for the day.

This is one of my efforts of Sydney's lightning - it is an anvil crawler - usually a sign of weakening storms or the back end of a retreating storm.