The system that brought rain and storms to much of eastern New South Wales at the end of December 2020 has continued into the first 3 days of January 2021. One positive is that large areas of the inland has now received some rainfall from the system as expected.

Some notable storm events have occurred over recent days which has caused disruption, localized flash flooding and or wind damage. Some affected towns and cities include:-

2 - Broken Hill (Western New South Wales). Reported in the media 2/1/2021 that a number of thunderstorms occurred some of which brought hail of between 2 cm and 4 cm including flash flooding of low lying areas.

Other notable rainfall events within the Central West slopes and plains include 38 mm at Dubbo 115 km to the north.

Isolated rainfall totals of 65 mm fell at Portable in the Riverina of New South Wales, 62 mm at Okeh in north west New South Wales, 53 mm at Glenorchy (North west of Glenn Innes) as well as falls of 29 to 61 mm around Wollongong and Kiama on the Illawarra coast.

Last week, it was stated that there was elevated fire risk at Albury and a fire was observed on a hillside in the distance. Overnight falls of 20 mm here as well as 28 mm at Hume Dam would have been beneficial to suppress the fire danger for the short term.

The rain events and recent storms has contributed to much of New South Wales receiving average to better than average rainfall totals for the year 2020 as shown in the plots below produced on the Bureau of Meteorology “Water and The Land” site although when reviewing the Rainfall anomalies for 2020, it becomes clear that much of western and southern New South Wales is only receiving average to slightly below average rainfall. While no part of New South Wales is currently in drought, there is a risk of these areas falling back into drought for the longer term if further rainfall is not received.

Given that the plots are for the period 1 January 2020 to the 31 December 2020, the rain and storms that impacted Broken Hill and surrounds on the 2/1/2021 will benefit the region further and the local water supply. 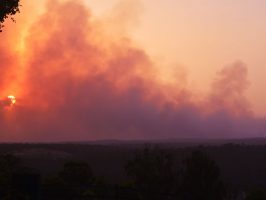 The Green Wattle Fire burned through thousands of hectares of land. Spectacular national parks and wilderness went up in flames! The pyrocumulus timelapse filmed here is the of the Green Wattle Fire.  The bush fire had been going for many weeks but it consequently flared up once more. The whole region was devastated. Pyrocumulus clouds developed when strong fire plumes rise. As smoke rises it finally cools to a temperature that allows the smoke particles to condense into cloud.

Coincidentally, Penrith recorded a temperature of 48.9C  -  a greater Sydney record set in 1939! Incredibly, it was so hot you could fry an egg!