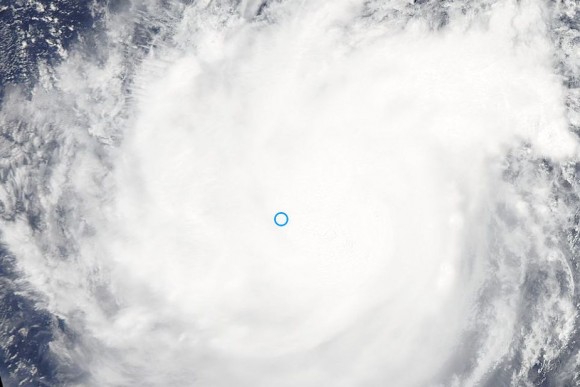 Typhoon Dolphin is the next Western Pacific Ocean typhoon for the season. This typhoon is currently not threatening the Philippines and it appears that it will track north west then north away from the country across open ocean. At the present time, it does not threaten any population centre in south east Asia.

Another weather station located at Agana Guam International Airport recorded a peak wind gust of 81 miles per hour or 129.6 km/h at 6.40 pm 15/5/2015. This station is located south of Anderson Air Force Base and as such, peak wind gusts were lower being further away from the eye wall.

There are no other weather stations currently in its path due to its location in the Western Pacific Ocean.

A satellite photo of the storm from MODIS (Rapid Lance) is attached taken 15 May 2015 as well as a more general satellite photo showing its general location relative to the Philippines.

The Dopplar Radar at Guam is currently down however the last image of the storm is provided showing the storm and eye wall relative to the island of Guam.

The forecast track of the storm is also provided. This suggests that the storm is unlikely to threaten the Philippines.