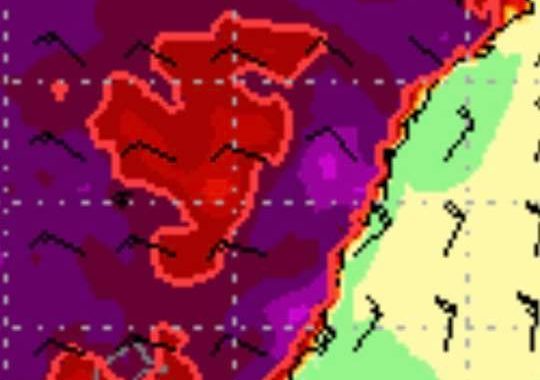 Let’s say a long hot day for Sydney with temperatures quickly getting to the 40s by 11am and then into the mid-40s likely by 1pm until 5pm ish or so. Keep hydrated and stay away from the fire zones. Also take care of animals.

Edit: temperatures on par with forecasts - take a look at Goulburn 37C at 600 metres above sea level.

Edit: We are behind the generally accepted 11am 40C rule of thumb but given the long day it will likely get there as the air mixes out. The issues are high dew points yet again! They need to drop for such extreme conditions with 19C dew points across Sydney. In fact the air is not particularly dry at this point - will they dry out later though?

Edit: Thanks Michael Bath for forwarding the sounding - surprise surprise another inversion that needs to be mixed out.

43C Richmond and Penrith at noon.

47.2C Penrith at 1pm - this is closing on the record hottest ever temperature in the Sydney basin!

Winds have picked up here and temperatures have just hit 47.6C just shy of the Richmond record of 1939.

48.2 at Penrith new record for western Sydney! Thanks Matt for the update