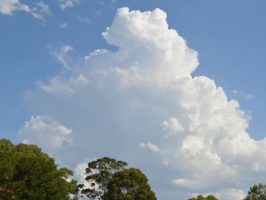 For the first time this January, a strong burst of summer heat has passed through southern Australia, especially across the inland regions of New South Wales and Victoria and it has now crossed into outback Queensland.

The burst of heat was not as intense as some of the heatwaves of recent years but it was significant as it has occurred during a La Nina year.

The heat mainly affected the inland regions of New South Wales and Victoria being the regions that have missed much of the recent rainfall.

The heat barely reached the east coast with sea breezes keeping temperatures at more moderate levels. On the 14/1/2021, parts of Western Sydney did experience at least one day where temperatures rose above 36C including Blacktown 37.1C and Penrith where a maximum temperature of 39.6C occurred. Due to sea breezes and NE winds prevailing, this heat barely made it east of Parramatta.

One stronger cell developed over northern Sydney which tracked off the coast over Mona Vale. This storm generated an isolated fall of rain of 29 mm at Mona Vale and 15.8 mm at nearby Terrey Hills. It is understood hail to 2 cm was reported from this cell.

All storm activity across Sydney ceased after sunset.

On the 15/1/2021, further storms occurred north of Sydney then Newcastle, the Hunter Valley and the North Coast and a few cells became severe. Generally, rainfall was not significant with the highest fall being 26 mm at Willina on the lower North Coast and 20 mm on the Barrington Tops. There was a very isolated fall of 53 mm at Boambee Reserve just South of Coffs Harbour. Grafton was hit by a significant storm with 9.8 mm falling in 6 minutes between 8.30 pm and 8.36 pm (Total 17.6 mm from the event) and a peak wind gust of 78 km/h at 8.36 pm.

The images attached to this post were taken between 5 pm and 8 pm around western Sydney prior to sunset.

It produced hailstones to at lest 2 to 3 cm in diameter as the storm passed over head on dusk! It also produced beautiful lightning! 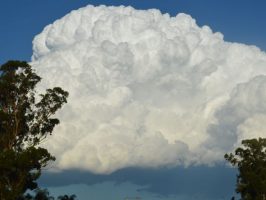 During the course of Monday afternoon 4 January 2021, a squall line swept across Sydney that brought significant wind gusts, heavy rain, small hail at Blacktown and a significant number of lightning strikes.

One media report suggested that there were 38,000 lightning strikes around and within 100 km of Sydney during the event.

While I could not chase the Monday event due to work commitments, it is noted that the storm swept rights across Sydney.

At Auburn where I work, there were at least 2 lightning strikes very close to the Cumberland City Council office building where I work and one may have struck the car park building due to the noise that was generated.

On the way home that afternoon, I noted that a drain became blocked on the corner of Kerr Parade and Marion Street which resulted in significant flooding of that section of road and a set of traffic lights were blacked out on Blacktown Road which suggested a local power failure.

The Monday afternoon storm brought peak wind gusts of 74 km/h at Camden between 3.42 pm and 3.47 pm, 85 km/h at the airport between 4.25 pm and 4.30 pm and rainfall of between 14 and 22 mm around Blacktown. Shanes Park in Sydney's West received 33 mm during the event being the highest rainfall total. Other suburbs had lower rainfall totals.

Late afternoon on the 5/1/2021, further showers and storms occurred across Sydney. I was able to take numerous photos of interesting cloud towers, cloud bases, cumulo congestus clouds and Cumulonimubus calvus cloud formations. Some of the cloud formations were impressive for the late afternoon sky.

One Particular storm occurred late evening over Blacktown that produced a heavy downpour of rain but little wind. While there was lightning, it was sporadic.

This event concluded the two day storm event for Sydney and all activity had cleared by 11 pm that evening.

The cloud images attached to this post are from 3 storm cells that formed over Western Sydney during the event.