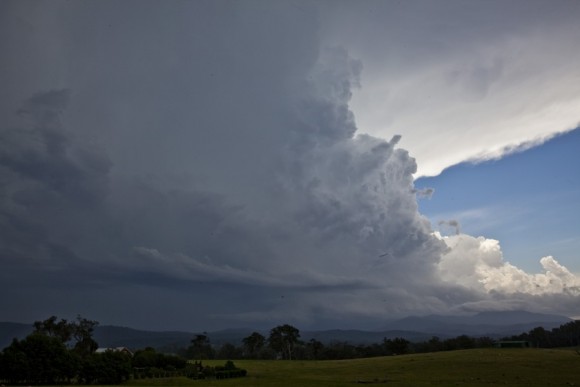 It is unbelievable how within 5 minutes the situation changed from not ideal to developing structure to incredible structure 5 minutes or more later. This storm developed rather rapidly near Bodalla probably on a triple point. I began the day Bateman's Bay and decided to get out of town and south to near Moruya. I waited there for some time to see what evolved. Of course, the coast further south was teasing me and perhaps may have produced some decent cells. Knowing that radar lags a little, I watched as cells pulsed and then weakened. More cells would developed west along the boundary. Can't get to them in there. A cell developed west of me but collapsed just as quickly. This was extremely frustrating and time was testing with a number of cells developing further west and also north near Nowra. I decided to move further south and was frustrated once again by a lack of opening in the trees. Past Bodalla, I turned around and just waited along the side of the highway in the township itself. Yes another cumulus developed. With Nick on the phone, I told him just how crap it looked after it had popped up with a crisp top and pileus. Not long after he hung up, the storm began to explode with the tower going right up! He rang again too hear my total reversal of enthusiasm! He confirmed an overshooting top with this explosive cell. The storm could not fit in the video field of view zoomed right out despite being on the mountains to the west. 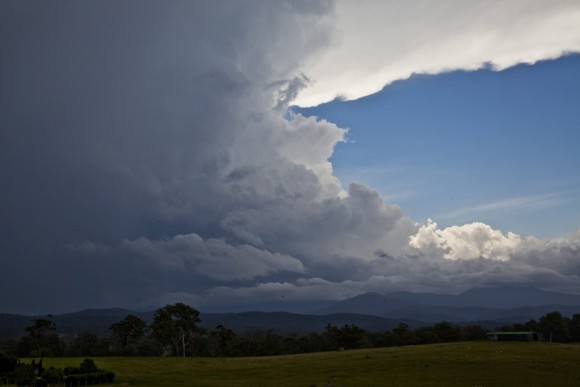 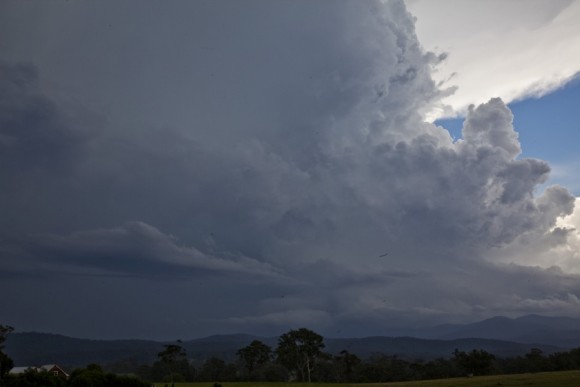 The storm could be seen spinning like a top and then tilted. Was the storm going to collapse already! The updraft went into second gear with a powerful and major filling of the updraft exhibiting a crisp and powerful cumuliform tower. What a sight - words could not describe what I was witnessing - nor the excitement! I filmed extensive time-lapse of it's whole life cycle and I could hear a constant rumble of thunder from activity within the storm. The storm had a back-sheared anvil and the anvil quickly spread east. The tower remained near stationary. And then it happened! fast moving scud raced west from overhead. the change had hit and was rapidly moving westwards towards the storm. This had two effects - it was going to block my view but also interrupt the storms environment with cooler air. The storm then became part of a complex of lined cells intensifying and weakening periodically. I had wasted no time and was already enroute to beat the change.

Finally in Bateman's Bay once more, I had tried to meet with Nick and he was having trouble at that point finding an ideal location (he found a good once later). So I simply waited the storm approaching this town itself. The storm produced some lightning and a reasonable base. The storm to the southwest and previously the Bodalla storm and now complex was approaching and passing Moroya. All the cells from south of Nowra down to Moruya virtually covered the whole coastline with cells producing frequent lightning and heavy rainfall.

Nick and I finally met up in Ulladulla and exchanged stories. After some more lightning attempts of the approaching cells, we called it quits and headed for a motel / resort in Nowra! This was another incredible display of nature! I feel fortunate to have witnessed such powerful and beautiful display of what nature can produce! 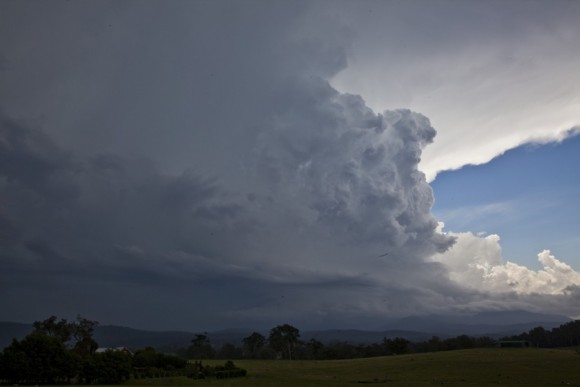 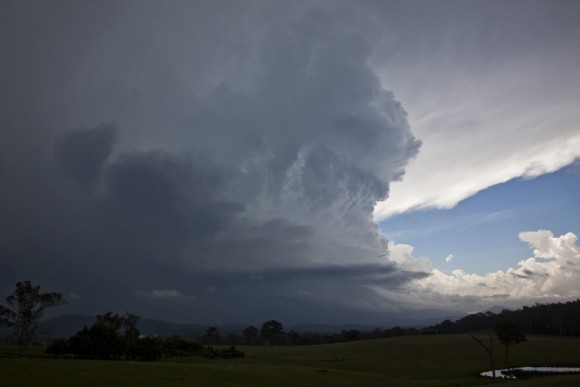