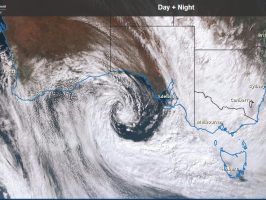 The cloud mass is now clearing out to sea but it has delivered some strong rainfall totals for Australia's food bowl - The Murray Darling Basin.

The same system has also delivered strong rainfall in areas south west of Alice Springs that has not seen much rain for up to 5 years.

Across the ranges of North East Victoria, falls have exceeded 100 mm although this is limited in area and there were significant rain shadows further south and east.

The area includes Mt Buffalo, Mt Hotham and Mt Feathertop region and the small farms that dot their bases. Smaller totals include:-

In surrounding areas, falls of 40 to 55 mm occurred including Corryong 52 mm and Albury Airport 46 mm.

In the far north west of the state, Hungerford and Wanaaring had 79 mm and Louth had 63 mm.

In the south east, the western areas of the Snowy Mountains received falls of 50 to 99 mm including 84 mm at Long Plain. A fall of 76 mm occurred at Burrinjuck Dam.

South West Queensland also received this event although some storm activity occurred along the Northern territory / Queensland state border as evening approached. The highest falls include:-

The falls have come as the El Nino wanes and there is the possibility of a La Nina event late 2016. Should this eventuate, then it would suggest a greater chance of more back up rainfall as the year progresses.

During Monday, a cold front passing through Victoria has brought some storm activity, brief pulses of heavy rainfall and strong winds including gales at elevation.

An impressive satellite photo of Australia is provided showing the cloud mass and the deep low pressure cell south of South Australia taken late Sunday 8 May. An array of weather is occurring across much of southern Australia within the large weather system seen. Conditions will now moderate as a new high pressure cell starts to dominate later in the week.

Bureau of Meteorology rainfall data and satellite photo 8 and 9 May 2016. 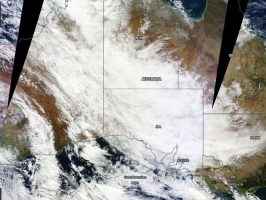 As seen in the two satellite photos of Australia taken by TERRA MODIS 7/5/2016 and 8/5/2016, a substantial cloud mass is covering the continent. It is not often that a cloud mass this size envelops such a large area.

The cloud mass appears to be delivering rains that are best described as “The Autumn Break” for the inland farming regions with more to come.

The cloud has delivered some substantial falls across south west Northern Territory and parts of South Australia and it is now passing over New South Wales and Victoria.

In New South Wales, rainfall has been heaviest across the inland south west, western regions, Riverina and the western parts of the south west slopes.

The falls are occurring in remote desert regions and vast regions are not covered by weather stations. As such, there is not good coverage where the rains are occurring. This could lead to some greening of Australia's red centre over coming weeks. On May 18, I will have an opportunity to fly over this region and if possible, take photos should I have a window seat to see any transition that may occur.

For the 5 hours to 2 pm, rainfall has settled in over the South West slopes delivering 22 mm to Albury Airport, being the highest figure for that period.

The satellite photos from NASA Worldview acquired 7 and 8 May 2016 are attached which provides an indication to the size of the event. 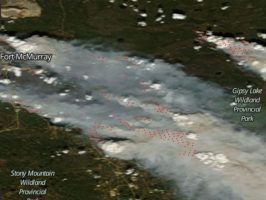 The climate features severe cold winters with snow and summers are short due to latitude although it can reach 30C during the short summer season. The highest temperature recorded is 37C on 10 August 1991 while the lowest is minus 50.6C on 1 February 1947.

Rainfall is relatively low at 464.8 mm per year and snow cover is assured during the long cold winter. The bioclimate is generally boreal moist forest which provides some background to the climate of the region.

A wildfire within this region is highly unusual which has caused the evacuation of over 80,000 residents. As seen from NASA'S Terra MODIS satellite, vast plumes of thick smoke casts a shadow across over the region. It appears the worst of the fires is to the east and south east of the urban areas and fires have been fanned by dry southerly winds.

Using the NASA's Worldview system, the fire hot spots have been overlaid across the image to provide a better image of the hot spots.

There is also a separate fire burning north of the Gipsy Lake Wildland Provincial Park. At the time the satellite passed over, a cold front had passed through and winds were north west which would help fire fighters. Conditions are now cooler than that of recent days.

Recent maximum daily temperatures that have occurred are:-

A forecast top temperature of 27C is being made for May 7 with cooler conditions to come thereafter.

Recent overnight minimum temperatures for the same period are:-

It can be seen that the minimum temperatures have been somewhat cold during this period which makes this event incredible.

When reviewing rainfall data for February to May, it can be seen that it has been dry. The heaviest rainfall has been 11 mm recorded on April 13 2016. The forest has dried out over recent months and given the right conditions, a fire has taken hold and reached such catastrophic levels.

It appears the worst of the conditions are over as long range forecasts do point to colder conditions and some rainfall which will help to ease the fire situation and assist fire fighters in containing the blazes across the region.