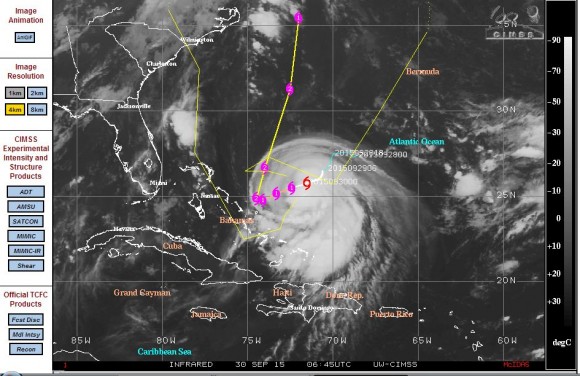 A new storm forming just north of the Tropic of Cancer and east of the Bahamas at latitude 25.6 degrees north and 72 degrees west have forecasters worried along the east coast of the United States. The storm is transitioning from a tropical storm into a Category 1 hurricane fast and is expected to complete the transition within the next 12 hours.

The storm is already named “Tropical Storm Joaquin” and the forecast models indicate some margin of error. The CIMSS forecast cone suggests the possibility of the system making landfall along the east coast of the United States.

The storm is well supported by seas surface temperatures of 28C to 30C although such temperatures drop sharply further north. Forecast models indicate the storm sustaining winds approaching 70 knots (Approximately 129 km/h) within 12 hours which is just above the threshold of a Category 1 hurricane.

The forecast model is suggesting the storm to track south west towards the Bahamas then make a sharp turn towards the north, north east. This is of concern because the storm would travel parallel to the east coast of the United States but remain out to sea for a period. Should the storm follow the forecast path, it would approach Long Island and eventually the Boston region. Sea surface temperatures in that region are much cooler than 27C thus the storm would weaken somewhat as it reaches higher latitudes.

What is of concern the most is that another weather system over the eastern part of the United States is set to produce significant rainfall and storm events across the north east and east. There are heavy rain warnings in place and forecast models suggest as much as 175 mm falling within some areas. Models from the National Weather Service are showing a large area of the north east expecting to receive at least 100 mm with some areas across North Carolina, Virginia, Delaware and New Jersey forecast to receive upwards of 175 mm over coming days. Even New York City is forecast to receive as much as 125 mm over the next 5 days from the rain event.

The 5 day rain model is attached from NOAA which shows this.

The matter of concern is how will Tropical Storm / Hurricane Joaquin affect the region. The storm is forecast to move north and could interact with the system which will intensify rainfall amounts and flooding potential. It will be a busy time for forecasters as the two weather systems encroach one another.

The CIMSS satellite photo of Joaquin shows an intense storm out to sea but with no eye and deep convection being a feature.

With the two storms close together, the first of the rains will be beneficial but too much rainfall will lead to flooding. It will be an interesting few days along the east coast of the United States due to the presence of the two weather systems close to one another. 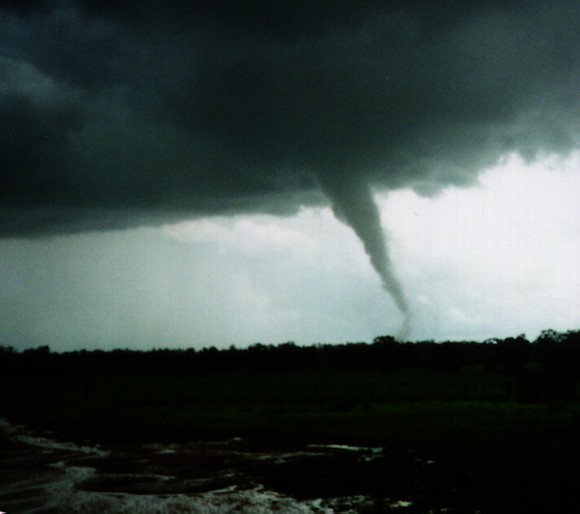 As at mid afternoon Monday 28 September, Typhoon Dujuan is commencing landfall along the east coast of Taiwan being the same area hit hard by Typhoon Soudelor early August. The storm is coming ashore as a Category 4 typhoon on the Saffir Simpson Scale with winds calculated at 120 knots (Approximately 222 km/h) BY CIMSS.

The eye of the storm is now starting to make landfall and the typhoon is moving west north west at 18 km/h.

Several alerts and warnings are now in force especially across the east coast and mountainous areas.

Some of those alerts are specific for rain, flooding and probable flash flooding. Extremely Heavy Rain advisories are in force for some areas including but not limited to:-

Torrential rain advisories cover much of the northern part of the country and mountainous areas not covered by the Extremely Heavy Rain advisory. The typhoon is already producing some very heavy flooding rains including:-

being the highest figures for the 24 hour period from 2.10 pm 27/9/15 to 2.10 pm 28/9/15. It is expected that the rainfall figures quoted above and others will swell over coming hours as the storm passes over the island.

As seen in the CIMSS satellite photos and models, the storm sustains a clear eye with heavy rain bands surrounding the eye feature as it encroaches toward Taiwan. This is an intense storm capable of significant damage. It will be interesting to see the outcome given that the area would still be recovering after Typhoon Soudelor early August.

Following landfall over Taiwan, the storm will weaken significantly but will still be strong enough to make final landfall onto eastern China where it will end its life span. 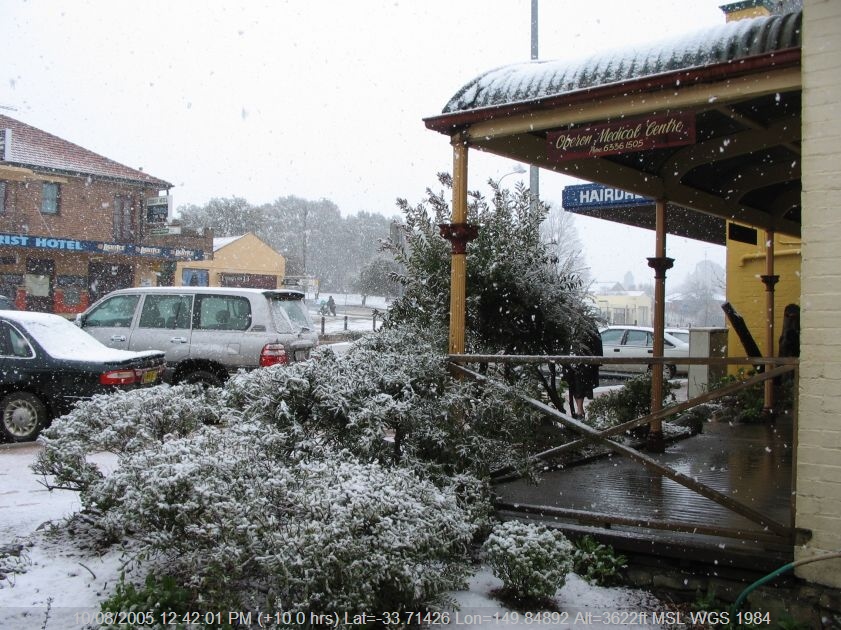