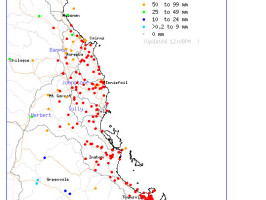 Spectacular vision of the eye of Tropical Cyclone Ita 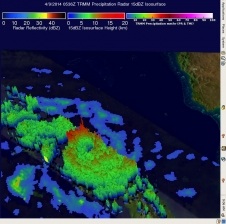 On April 9, the TRMM satellite saw rain falling at a rate of over 99 mm/3.9 inches per hour within Ita's feeder bands over the coast of southeastern Papua New Guinea.
Image Credit: NASA/SSAI, Hal Pierce Tropical Cyclone has been upgraded to a category 5 cyclone by the Bureau of Meteorology today. Ita has a distinct eye typical of severe tropical cyclones with a central pressure down to 935hPa and wind gusts near the centre anticipated at this stage to be 285km/h! The tropical cyclone's anticipated path has only changed slightly in the last 24 to 48 hours with expected impact just north of Cooktown, Queensland. Unfortunately though, even though this is uncertain, the track veers to the south maximising its impact along the coastal region particularly in terms of very heavy rainfall and flooding.

Emergency services are on full alert at this point.

A tornado in Cebu damaged 29 houses. The footage shows debris from the roofs of houses and seems to be anticyclonic in nature but it is hard to determine from the video. At one point it shows the cloud base with possible RFD cut but the video quality is not the best!

It seems Cebu has had other tornadoes in the past year - one in November and the other 9 months prior to this tornado.