During Saturday morning, river levels had subsided to 9.62 metres AHD at approximately 3.15 am before rising due to the second burst of heavy rain and storm activity across the region. The photos attached to this post were taken when flood levels were at RL 13.31 metres (Approximately 480 mm below the final peak). Flood levels are now subsiding and have just fallen below major flood level. During my visit of Tuesday evening, the following were visible in addition to news crews preparing statements for the evening news bulletins:- During Tuesday, Sydney experienced its final wet day. Rain has fallen at some point on every day between Tuesday 22 February and Wednesday 9 March 2022 which is a period of sixteen days. When tallied, cumulative totals have ranged between 400 and 700 mm. In Sydney city (Observatory Hill) 617.2 mm has fallen across the past 16 days.

At Richmond, 501 mm has fallen across seventeen days. Further, at Richmond, 681 mm of rain has fallen so far this year to Wednesday 9 March 2022. Some of the figures are approaching the average yearly rainfall for such areas and the scenes of such flooding soon becomes obvious. Nowhere across Sydney has escaped and every suburb is impacted in some form. However, the worst of the flooding is across Sydney’s West. As part of my second visit to flood ravaged Windsor, it is also evident that flood waters have reached into the western side of Blacktown being areas just west of Dean Park including areas around Scholfields and Riverstone.

It is also identified that the river has been in flood for eight days which is a considerable length of time.

For the 24 hours to 9 am Wednesday morning, rainfall totals approached 200 mm at one location on the Northern Beaches being 195 mm with other nearby areas recording between 100 mm and 150 mm. Such high totals have resulted in flash flooding even in Manly causing damage. Late Tuesday, rainfall eased and early Wednesday, the rainfall cleared Sydney allowing for the flood levels to begin receding. At the time of writing, the true extent of the damage is not known but it will be extensive. During Wednesday, another fatality from the event was confirmed being a truck driver who drove into flood waters then drowned.

It will be some time before flood levels recede to safe levels and the true extent of what has occurred is known. 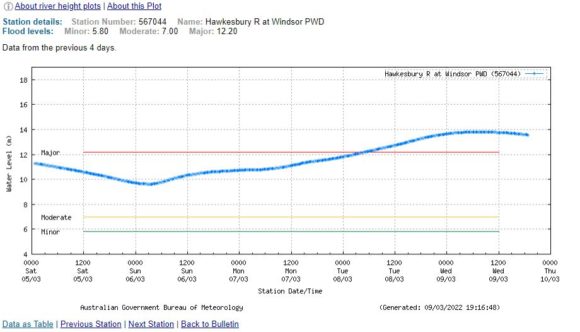 1 - Photos all taken during Tuesday evening at Windsor.

2 - The Livetraffic link to images showing the Windsor Bridge being submerged (From Transport for New South Wales) dated 2 March 2022.

4 - Rainfall for the 24 hours to 9 am Wednesday morning (BOM recording stations only for Sydney).