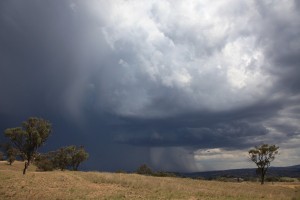 Jeff Brislane and I chased the region west of Mudgee and found ourselves eventually targetting the cell that began its origins south of Wellington! This storm exhibited spectacular structure for some time before gradually becoming slightly elongated. The rain-free base was also consolidated and hail shafts dumped large hail to about 3cm (measured). It was an exciting period but we had no roads and then the storm rapidly went into decline further east. More storms provided hail core observation sessions as well as photographic opportunities. It was a great afternoon. As we headed off from close to an hour on the first cell, we got blasted by 2-3cm hailstones and then headed north. This was the rear view of the storm - moving into regions with no roads. By the time we got into the secondary positon to intercept, this cell had rapidly collapsed - urrr why? Perhaps SE winds moving cooler air.

Anyway, we ended up intercepting another cell that had intensified near Wellington and this seems to be going into a split here (the hodographs favoured splits). Very nice and intereting structure evovled and we concentrated our efforts on this cell. Interestingly, cells were continuously developing in the region south and southwest of Wellington mainly. Cells further north struggled - this region (near and south of Wellington) was where lower level shear was more favourable despite the northern area having slightly "higher CAPE".

Some nice opportunities presented themselves from a photography perspective: