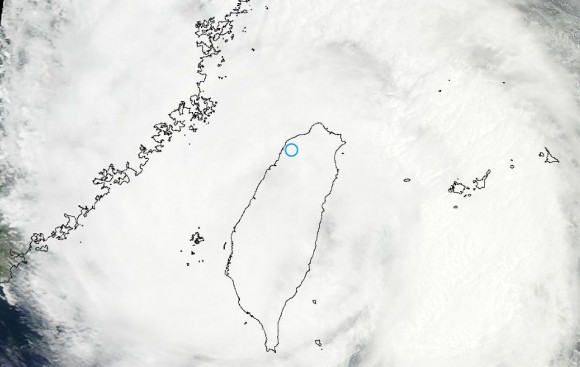 Typhoon Soudelor has made landfall being a direct hit across Taiwan. Towards the latter part of Friday, the storm approached the eastern coastline of Taiwan where it unleashed some torrential rain across the eastern side of the island. With a mountain barrier blocking its path, the storm unleashed torrents of rain across some localities while others were spared the worst.

Weather stations across the island have withstood the onslaught and this storm has been well documented by weather stations monitored by the Central Weather Bureau of Taiwan. As a result, an excellent analysis is provided.

Flooding rains, storms surges and gale force winds have already claimed lives (So far 4 according to CNN reporters). There is likely to be significant damage across the north east where the storm has hit hard. Prior to the storm making landfall, the Central Weather Bureau had issued numerous alerts and evacuations had been undertaken. Numerous cancellations were evident and emergency services were put on alert.

Judging by the rainfall and wind, this is clearly a major event.

These are coastal recordings.

At Yilan, a peak wind gust of 48 metres per second was recorded with 228.5 mm of rain observed in the rain gauge.

Some of the rainfall figures unleashed by this storm are substantial and includes (Readings at 1.15 pm 8/8/15 from 12 midnight to 1.15 pm Saturday).

At Taipingshan (Datong Township), rainfall was so prolific that almost 100 mm per hour was being recorded at peak intensity as such:-

Accumulated precipitation for the 7 and 8 August to 10.20 am Saturday (This includes Friday). The Taipingshan station is excluded as this is addressed above:-

Image 1 - CIMSS - Acquired 8 August showing the typhoon directly over the island. The eye filled in prior to landfall. An intense storm is crossing the northern part of the island and is impacting the heavily populated area of Taipei. The final forecast models showed a Category 3 typhoon with winds of 105 knots (Approx 194 km/h) with gusts to 130 knots (Approx 241 km/h) at or close to landfall.

Image 2 - Satellite photo from MODIS (Acquired by NASA 8/8/15). The whole inland is impacted by the storm and the western side is impacting Eastern China.

Image 3 and 4 - Radar images showing the storm (Acquired from Central Weather Bureau Taiwan 8/8/15). Image 4 shows the eye just before it filled in. The eye filled in just prior to landfall.

Image 5 - Rainfall plot (Acquired from Central Weather Bureau 8/8/15). This rainfall plot is showing that the north east of the island is hit very hard by torrential rain. The plot is taken at 10 am.

The storm is moving off the west coast but heavy rain is now impacting the south west part of the island. The rainfall figures quoted here will increase especially over the west and south west coasts but will begin to ease over the east and north east which will allow emergency services to commence a clean up of the damage caused which is likely to be significant.