There are four main types of storms that most storms can be categorised into:

Single cell thunderstorms are those thunderstorms that develop independent of other thunderstorms. They simply go through the development stage, the mature stage and then dissipate without creating other cells. They may develop over a mountain or isolated hill.

Multicell thunderstorms are thunderstorms consisting of several cells adjacent to one another in the various stages of development.

In most cases, thunderstorms tend to develop in adjacent clusters called multicells. However, multicells tend to go through several stages of development that allow for a longer life span. As cumulus develop, the dominating cumulus begins to grow into large cumulus eventually to produced light precipitation. As this precipitation and corresponding downdraft descends, evaporative cooling (evaporation is a cooling process) causes the air to accelerate towards the ground and flow outwards. In certain conditions, the descending and out flowing air can act as a wedge as the colder out flowing air undercuts the warm moist air in the regions surrounding the main cell.

This can have the effect of intensifying updrafts of surrounding cells. These cells grow into their mature stage and also send down precipitation and become the dominant cell. At the same time, the newer cell produces downdrafts that interrupt the updraft of the original cell.

Consequently, the older cell will begin to dissipate. This process is so efficient that the storm can last for up to a few hours or more with a continuously changing structure.

Because of the unusual structure of multicells, the developing and dissipating process causes the storm to have a motion veering slightly at an angle to each cells line of motion. In other words, if for example the cells are moving east, multicellular development on the northern side has the effect of veering the overall storm to the northeast. An observer located to the east of the original cell will notice the original cell dying and the newer cell with precipitation developing to the north. The main precipitation will miss the observer.

This peculiar motion of multicells has confused and still confuses many people such as farmers into thinking the storm has 'changed direction' or 'come back again'.

This confusion is due to the newer cell developing in a region on the side or even towards the rear side of the storm. Rapid development at the rear can also make a multicell appear to move in the opposite direction. These storms represent the best examples of ever-changing systems.

Multicell thunderstorms can become severe and depends on how efficient the arrangements of the downdrafts and updrafts. All types of severe weather can be experienced from severe multicells including giant hail, severe winds and tornadoes.

Squall lines are systems of thunderstorms arranged in a line. This line can extend for several hundred kilometres. Squall lines are normally very severe and produce some of the strongest straight line winds. It can produce other forms of severe weather even weak tornadoes.

To a certain extent, a squall line resembles a long system of multicell thunderstorms. The development is occurring on one end and dissipation is occurring on the other. However, in between these ends, the storm is very similar with a large anvil extending well ahead of the main body. There are no separate cells as is the case for multicells. As it approaches, a shelf cloud is normally observed with an extensive precipitation cascade. An approaching squall line is very dark and very spectacular. As it approaches, an observer will notice the strong updraft flowing into the storm band. A brief lull in the wind will be replaced with a sudden blast or squall of wind from the storm in the opposite direction (the downdraft).

Moderate to heavy precipitation occurs near the downdraft. The precipitation will gradually decrease. The rear section is usually less spectacular but consists of a back anvil.

Squall lines develop as a result of a line boundary where warm moist air is undercut by colder air. Consequently, the downdraft flows down just behind the updraft. This is the reason why the shelf cloud develops. The cold air flowing downward condenses some of the water vapour contained in the updraft. Squall lines move mostly at right angles to the direction of the cloud band. There is no confusion as in the case of the multicell type. At times, they can move quite rapidly.

Supercell thunderstorms are the largest and the most severe of all types of thunderstorms. In fact supercells are so large they show up on a satellite photograph in the shape of a tear drop. Other types of severe thunderstorms also show up on satellite but individual cells are more difficult to make out. Most of the large tornadoes and giant hail events are spawned by supercells. They are also known for producing very severe straight line winds. The reason why supercells are the most severe is because of their rotating structure. The updrafts spiral into the storm and are not interrupted by the downdrafts which descend from a separate region of the storm.

Features and behaviour of supercells

The supercell itself is mainly one large cell. Because of the powerful updraft, the anvil extends a long distance ahead of the main body of the storm. 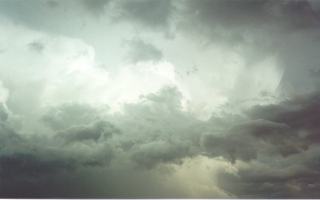 The side anvils in particular are very thick and crisp. Towards the rear of a supercell thunderstorm, a dome protrudes above the top. This is also a result of the powerful updraft shooting through the inversion.

The rear section of the supercell consists of a flanking line: a line of cumulus cells decreasing in height away from the main cell.

Various sections of a supercell consist of the different types of precipitation. Medium sized hail exist near the gust front with large to giant sized hail in the central section. This is often known as the hail shaft. The region where the flanking line meets storm is where wall clouds and tornadoes normally develop. Not all supercells produce wall clouds or tornadoes. These only develop when conditions are ideal. Tornadoes and wall cloud development are discussed further in the section on tornadoes, water spouts, land spouts and dust devils.

Unlike other storms, once supercells develop they produce their own energy. They are often regarded as mesocyclones. They do not require cold fronts or other forms of uplift to maintain their updrafts. Because of this efficiency, they last and may produce severe weather for several hours.

There are several complex factors that influence severity of supercells. 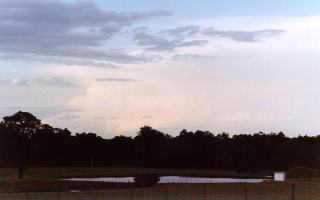 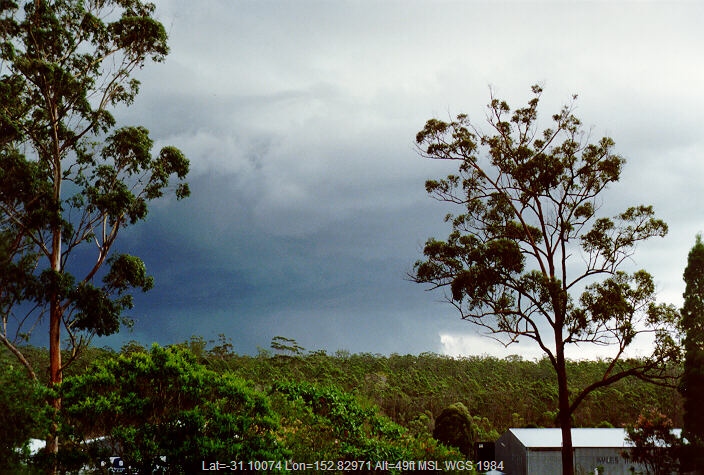