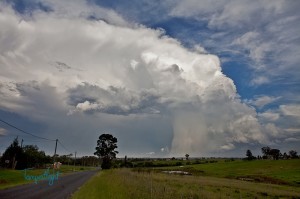 There were some nice cells around Sydney today and this afternoon saw a pair of thunderstorms cross the Western Suburbs from North to South. The first cell produced some spectacular clear air lightning bolts which struck many kilometers ahead of the storm. It also produced an amazing high contrast hail/rain shaft, the best I have ever seen.

Another storm developed north of Richmond near Colo and followed the first storm into the Sydney basin, this time further west. I set up at Orchard Hills and got some time-lapse of this cell which also produced some spectacular lightning.