Another day of high CAPE - another day of hope. However, there was a cap to overcome. The atmosphere did heat up and it became apparent that moisture was persisting in the Wollemi. With Nick Moir and Rodney accompanying me on the chase, we were joined by John Scerri (although he had to bail out after a short chase).

Storms were slowly developing near Colo Heights initially though struggling. Another cell had initiated near Putty. This soon began to explode and we gave chase: we virtually circumnavigated the cell.

On the northern side, we enjoyed a spectacular anvil and tall updraft. Unfortunately, after it was time-lapsed, the storm began to weaken. And in simultaneous fashion, an updraft, a powerful updraft, exploded into view to it's left. I was confused, wandering how we had gone all the way up the Putty and not even notice this cell. I guess that's what we define - explosive!

It wasn't long before we were en route to Broke. However, we simply had not choice but to stop, film and photograph! This atmospheric accident was not something I had anticipated. The structure was ridiculous! Powerful towers with laminar bands. On radar, the storm had produced a couplet and also veered left of the typical storm directional flow.

The storm transitioned into a couple of updraft and gradually it weakened. More storms developed along the Putty Road and we gave chase, but it seemed most of the energy had been utilised. 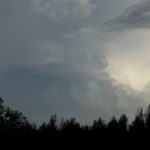 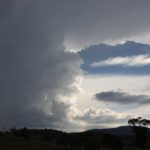 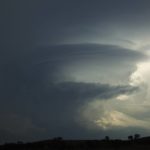 After this, we decided to head home for a meal - long day out! Why not take one last look at lightning! A few shots and I called it quits. I didn't realise that the shot of one bolts was quite spectacular!