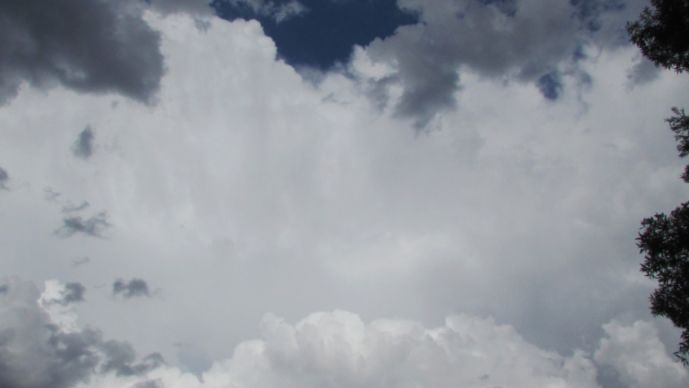 Sunday 1 March 2015 saw a significant weather event pass through Eastern New South Wales. In addition to being one of the hotter days this season, a strong southerly change made its way north along the coast and impacted Sydney after 2 pm as a southerly buster.

Early this day, I drove from Batemans Bay back to Sydney always being ahead of the main wind change.

As I was driving north, I constantly observed a narrow band of showers and weak storm cells to the south but tracking along with the change. These were not significant and certainly did not warrant a separate chase.

I noted at Goulburn, Marulan and at Berrima constant but strong dry north west winds just ahead of that wind change. Cloud towers simply struggled to form in this environment.

It was interesting to note that the very strong dry north west winds did not reach Camden.

At Camden, I was able to observe in the distance the cloud bank that heralded the southerly wind change to the south.

Cloud towers simply struggled to form and I gave up the planned chase. Following some shopping at Prospect, I was amazed that a high based storm cell had managed to take shape to the south over Camden probably assisted by the wind change. Another cell was trying to develop to the west and a further cell developing to the north of that.

It was too late for me to undertake any further chasing. A storm cell passed over Blacktown on that southerly change and it developed further to the east as it tracked over Sydney.

I have limited photos which I still need to work on.

Over Sydney, the wind change reached the threshold of a southerly buster.

At Sydney Airport a peak temperature of 37.9C was reached at 3 pm (Winds were turning from the NW to east at this stage). At 3.21 pm, the temperature had fallen to 32.9C (Easterly winds). At 3.34 pm, a temperature of 24.4C was observed with a peak wind gust of 96 km/h. A similar gust of 96 km/h occurred at 3.39 pm. This has easily reached the threshold of a southerly buster.

At Newcastle, a peak wind gust of 69 km/h was observed at its weather station as the system passed through.

To conclude, the 1 March has been a day of extremes considering that temperatures reached well into the 30s, a southerly buster has brought a vigorous wind change on the coast and a series of thunderstorms developed with that wind change.

I will post some storm images as soon as I have finished working on them but any additional reports and photos are welcome at this post.