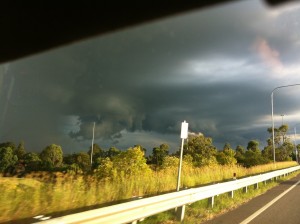 Storms formed around Campbeltown this afternoon and tracked north Towards Penrith and St Marys. One of these cells intensified with a strong radar return or two before breaking down rapidly. Before it broke down though it produced a very well defined funnel cloud. At first I though the lowered areas were just scud but it appears some decent interaction was going on as a funnel appeared rapidly and I was even able to see it condensate before my eyes!