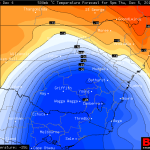 Depending where you are in NSW or Victoria today, this system's influence is impressive. Temperatures at 500hPa over Sydney for instance will drop in just 6 hours from -14C to -24C by 06Z or 5pm this afternoon. This is rather impressive destabilisation. Rain totals down in SE NSW are impressive and there should be snow on the higher peaks of the Snowy Mountains. I would not be surprised with such cooling that a few storms will develop but with higher bases due to lack of moisture.