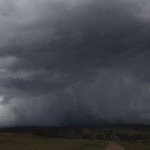 Storms fire rapidly from early this afternoon and drifted southeast. There were numerous storms although it seems the most significant storms occurred in the North West Slopes region. This storm earlier in the afternoon developed near Ebor drifting towards Coffs Harbour. 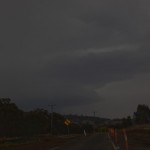 A couple of longer lived intense cores on radar with the storms moving from the region south of Inverell to the region near Manilla. This environment favoured right-moving storms.