Following on from a six (6) day period in which no rain fell across Sydney which ensured a sunny Easter period, a fast moving squall line surged across eastern New South Wales and Sydney late Tuesday evening between 8 pm and 11 pm.

It was a fast moving squall line which produced damaging winds in isolated areas such as what occurred at Goulburn located 180 km south west of Sydney. When reviewing the full archive radar images for this event, it is clear that the squall line maintained its structure even as it passed out to sea.

As the storm passed over Sydney later in the evening between 8.39 pm and 10.19 pm, it did produce a short period of strong winds and heavy rain. A review of the radar images shows the storm as having a near north to south orientation with the heaviest rain being only 5 to 10 km wide.

Wind gusts across Sydney ranged from 41 km/h to 70 km/h depending on location and rainfall totals were not large, typically 9 to 15 mm. The rain that fell was heavy for a short period of time before easing. The initial squall was followed by a second period of moderate rain but following this, the clearing trend was rapid.

The entire system was part of a more broader rain event that had its greatest impact across Central Victoria during Monday and early Tuesday where rainfall totals across a large area of the state reached 25 to 50 mm. Such rainfall even extended into the drier north west areas of the state such as the Mallee and Wimmera regions. The same system progressed into eastern New South Wales during Tuesday afternoon. During Tuesday, maximum daytime temperatures reached up to 29.6C at Penrith which is unusually warm for mid to late April. 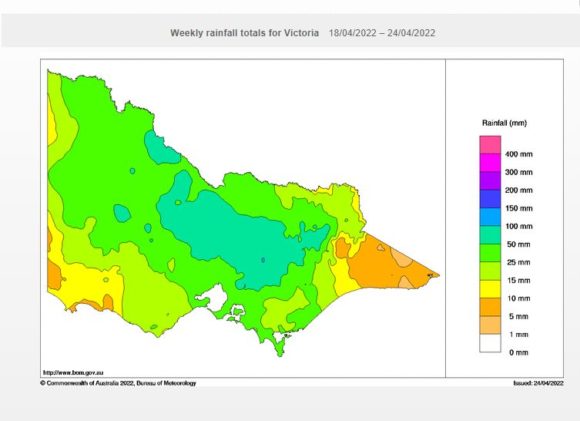 Late afternoon, cloud thickened and between 8.39 pm and 10.19 pm, the cool change and squall line surged across Sydney providing a sudden end to the brief warmth.

No photos were taken because the lightning was not intense but a shelf cloud at night was observed. The radar images taken from “Weathex Archives” 25/4/2022 provides clues of its shape, orientation and its track across Sydney.