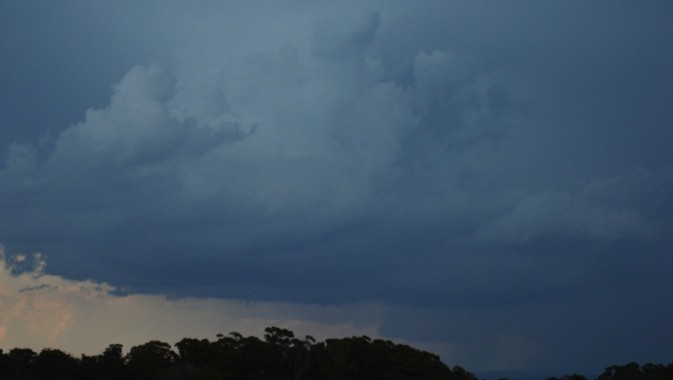 After reviewing weather models and possible storm setups for the day, I concluded that the northern Southern Tablelands had potential for storms throughout the afternoon.

Capes and lifted indexes were good.
Winds were forecast to be a north east direction.
Good dew points towards the coast.

However, I was concerned with the upper level steering winds and a potential warming of the mid level of the atmosphere.

I was also aware that if I went too far inland, moisture levels would drop sharply because of hot to very hot dry conditions across the southern inland New South Wales and temperatures well into the 30s.

I gave the northern southern Tablelands a reasonable chance but elected not to proceed beyond Marulan. I drove to the service centre north of Marulan and waited. For a while, weak cells developed to the north whilst a separate cluster of clouds developed to the west and came towards me.

The clouds coalesced into a storm cell which produced some interesting cloud towers and shapes. For a while, I liked this cell because it was more isolated and separate from the cluster building further north. I noted anywhere further south, clouds struggled to develop which suggested to me a moisture problem.

This cell developed in an area that I could not get to so I had to observe it. I eventually drove to Canyonleigh to watch it and photograph it and that effectively concluded my chase. I had no options to intercept its base as it moved through rugged country to the west. It eventually weakened and fell apart.

This cell went on to produce such a massive anvil that the whole environment across the region was ruined and heating was lost. New developing cloud towers and potential new storm cells nearby weakened and disappeared so by the end of the day the region was covered by a single layer of cirrus cloud.

At the same time, I was observing cloud towers to the south towards Goulburn but I let them go. They too struggled and fell apart.

I documented one storm overall but if the steering winds had only been better, the potential for a bigger afternoon could have been realized.