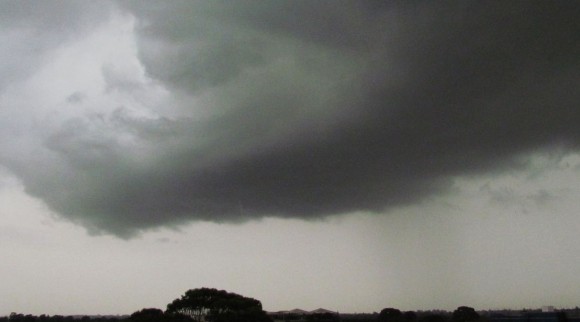 During the afternoon of the 12/11/15, a heavy rain shower passed over Western Sydney. This may have been a thunderstorm but at Auburn, no thunder was heard. An image of the cloud base passing over Auburn is attached. While heavy rain featured, totals were mostly under 10 mm as the shower event was short lived.

During the 12 November, a number of significant rain events occurred and recorded at weather stations including:-

There was an isolated fall of 56 mm at Thredbo during the period.

Such falls were isolated in nature.

During Friday 13/11/2015, thunderstorms became widespread across New South Wales and especially along the coast including Sydney, Central Coast, Hunter Valley and Lower North Coast with a number of these becoming severe.

Notwithstanding certain storm chases undertaken to document the events, some of these produced heavy rainfall, hail and, local flooding and power outages. Parts of Maitland suffered power losses from a certain storm late in the day at around 5.30 pm.

Even in Sydney, some heavy rainfall totals occurred including:-

During a thunderstorm over Blacktown on Friday, it is believed that 30 mm fell in a space of approximately 30 minutes.

This is showing 53.4 mm in the space of 60 minutes including 38 mm in 30 minutes indicating the intensity of the event.

During Saturday including overnight, further rainfall along parts of the New South Wales coast has produced some further big rainfall totals. Up until 9 am 15/11/2015 some totals include:-

Even in South East Queensland, storms and heavy rain has featured. Maridoan TM received 127 mm and Coops Corner received 126 mm. Both locations are within the Noosa region. Other areas around Noosa had as much as 50 to 98 mm.

Summing up, this has been a wet period for many areas of Eastern New South Wales and parts of South East Queensland although due to thunderstorm events, much of the bigger rainfall is hit and miss and the bigger totals are isolated in nature.

1 - Photo of rainstorm approaching Auburn. This is taken at around 4 pm from the Auburn City Council car park roof looking west showing the cloud base 12/11/2015.