During the five day period, a significant rain event impacted much of New South Wales and Queensland although the more significant impacts occurred across Queensland which has resulted in widespread flooding again.

As shown in the Himawari satellite image of Australia late Friday 13 May 2022, there were three large cloud masses passing over large areas of the country although the most significant was the cloud mass along Australia’s east coast and stretching into South east Queensland. Even across the eastern inland regions of the state, there were regions that received 100 to 200 mm with isolated totals over 200 mm.

Some examples of this included:

An area between Gladstone and Bundaberg received between 100 mm and 200 mm and such falls were common. In particular:

Are amongst the highest totals for the day. 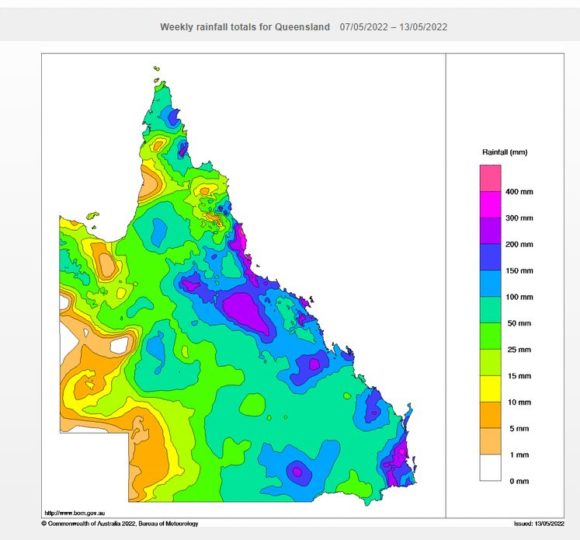 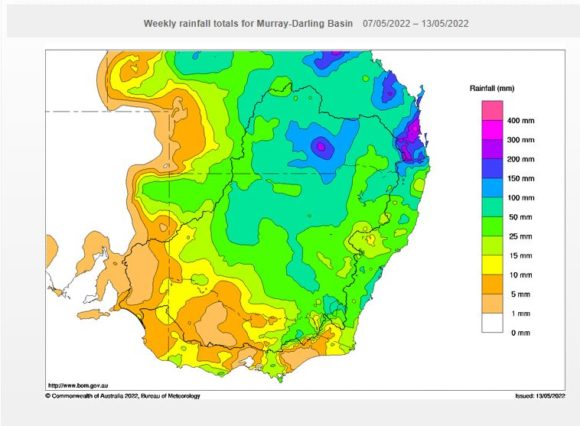 An area of south east Queensland but inland from the coast received widespread 100 to 200 mm falls and similar totals also fell in some suburban areas south of Brisbane City. The heavier falls included:

Are amongst the highest. This area lies south and east of Toowoomba encompassing the Lockyer Valley and ranges to the immediate south.

Across New South Wales, falls were much lighter and across Sydney, Monday, Wednesday and Thursday were the wettest days. Rainfall was not particularly heavy but persistent and thick nimbo stratus cloud featured across all three days. Isolated moderate to heavy totals fell during the 10/5/2022 including:

Were amongst the heavier falls. Compared to what has occurred across large areas of Queensland with significant flooding such as rivers and streams across the Lockyer Valley and Gympie, renewed major flooding was avoided.

This event has continued a run of recent rain events for 2022 which has contributed to a very wet start to the year. In Sydney’s case, this event only added to the yearly rainfall total which is unusually high for the period January to May.

Attached are rain plots for the period produced on the Water and Land site. It is also noted that while the rainfall was expected to cross into northern Victoria, much of the state missed out and what rain did fall, it was lighter than expected.