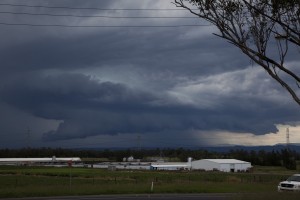 I had a little spare time to chase locally and headed out to local look outs watching the Penrith storm intensify and become organised. It did for about half an hour or so and seemed to indicate wall cloud behaviour consistent with the indentation like hook on radar (I guess inflow notch feature) on one or two frames. There was some inflow. But as per usual, outflow developed once the separation began to disappear near the notch area.