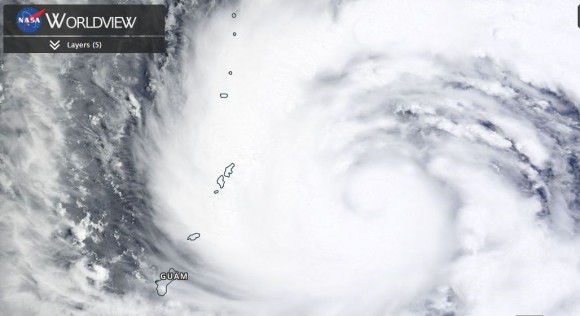 According to forecast models, Typhoon Soudelor is now packing winds in excess of 120 miles per hour (200 km/h) as it continues its advance westwards at 13 miles per hour (Approximately 20 to 22 km/h).

Late Sunday Saipan (Tinian) (Mariana Islands) the eye wall passed over the island. A weather station at the airport has recorded some limited data very close to the heart of the storm.

At 10.54 pm late Sunday, a wind gust of 91 miles per hour (Approximately 146 km/h) was recorded from the north west. It is not clear what occurred between 11.08 pm and 11.52 pm as no wind data is available from the local weather station. At 11.52 pm, wind gusts of 62 miles per hour were being recorded (Approximately 100 km/h) from the south west. It is not clear if the eye passed over the weather station or just to the north because there is a gap in the wind data set at the time.

The storm has now passed well away and over the next few days will approach Taiwan or China. This is now a powerful storm and it will be interesting to see what occurs.

Using "Worldview" MODIS (Acquired from NASA 3 August 2015) and manipulating the image and layers, the storm approaching the Mariana Island is clearly visible. Using Worldview second image (MODIS), the location of the typhoon is shown in the lower right of the image. The storm will pass over the Philippine Sea. Given its current track, it now threatens Northern Taiwan and parts of China even though the storm is tracking over open ocean. The maps have been layered over the image to provide a much clearer image of the Typhoon and its location.

This storm should reach a powerful Category 4 typhoon in coming days and is certainly a dangerous storm to watch.