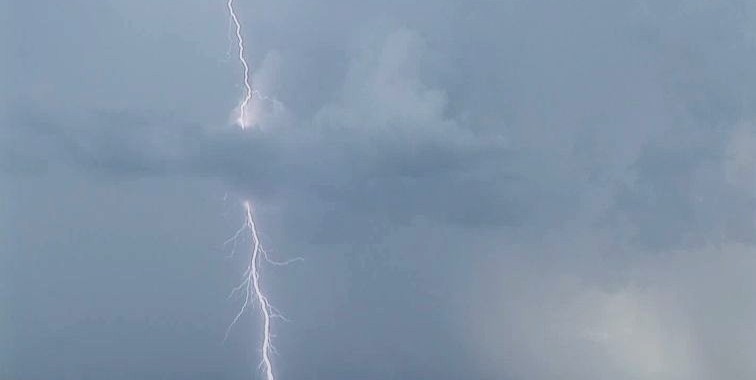 Friday afternoon 9/1/2015, I was fortunate enough to be able to undertake another storm chase across outer south west Sydney.

Earlier that day, I had to have the car serviced being the 30,000 km service however I must thank Phil Gilbert Toyota at Lidcombe for giving some priority to my vehicle which enabled me to commence the chase by 1.30 pm. That allowed me to be approaching Penrith on the M4 Motorway near 2 pm.

This storm chase was highly successful and it was one chase I enjoyed by myself. While it was a local chase, it was highly rewarding with many photos taken due to such good contrasts at times.

Near 1 pm, three small cumulonimbus towers or cloud cells were observed to the far west from Auburn. They were relatively isolated in nature but none had properly matured. As soon as I received my car, I headed west to work out which cloud cell I should target.

I soon discovered that the northern cell was struggling to organize a little, the southern cell was also struggling while the central cell began to dominate the region. I Selected the middle cell. This cell became the focus for my photography and I finished up taking 35 minutes of video when it became lightning active. The cell developed across the Blue Mountains and moved south east close to me where it intensified and produced many cloud to ground lightning strikes. This cell had a relatively long life and continued to develop new updrafts including another base further west.

At the same time, the northern cell began to redevelop again after struggling for a while. This cell eventually passed over Western Sydney and intensified significantly as it passed over the Blacktown Region. I discovered later that evening the following rainfall figures which are impressive:-

A friend later advised me of a significant rainfall event at Blacktown but no hail observed. I also discovered that a power failure had occurred because I had to reset my electric clock.

This cell reached it peak in this area then appeared to have gone into rapid decline thereafter. I let this storm cell go. As soon as I had enough taking photos and film of the cell to my immediate west which was showing signs of weakening, I packed up and drove south to investigate a cloud tower that was rapidly taking shape towards Camden.

This cell became a new storm at Camden. I drove into Oran Park to watch this storm. I was lucky to be in the right place at the right time to watch a small storm mature with spectacular results and wonderful contrasts. The storm became rather strong further east and I could see hail shafts falling and even distant evidence of strong winds at ground level (Possible microburst or downburst). I witnessed a spectacular lightning strike and as soon as I brought out my video camera, I managed to capture a few of the strikes that were occurring.

I followed this storm south of Camden and towards Picton where a third storm developed with wonderful contrasts and updrafts close by. At one stage, I was stunned to look up and see what appeared to be a possible funnel cloud attached to a developing cumulus cloud / updraft tower. I managed to take 2 photos before it disappeared.

This storm continued to produce updraft towers until near evening when it became obvious that allot of cloud that had built up over the southern Tablelands began to affect the storms structure. I decided to concluded this chase at this point. It appeared the storm started to weaken thereafter.

I drove back to Windsor along the Northern Road where I intercepted a fourth storm of the day which was much weaker. This concluded the chase for the day. I will post the photos separately.