March 2022 will be remembered as a month of intense rainfall and numerous flood events across much of coastal New South Wales.

To assist the post, a number of weather stations have been reviewed and comparisons made for the following:

It is only when such a comparison is made does the extent of the big wet along the coast shows itself. For the first three months of 2022 between January 1 and March 31, the following has occurred at the following locations.

The coastal rainfall for March and for the first three months of 2022 is staggering as follows:

When the March rainfall of the above centres is compared to the yearly rainfall at the following inland centres situated within the wheat / sheep belt of New South Wales as shown:

It becomes apparent that:

At some locations, new monthly rainfall records have been set such as what has occurred at Penrith and Richmond.

As a result of such heavy rain along the coast, river catchments are saturated and as a result, there have been numerous flood events. Over the past week, while the Hawkesbury River Valley did not flood a second time, renewed flooding did occur at Lismore and surrounding areas and across other North Coast regions. The latest rain event saw significant flooding again at Lismore causing more misery and further loses which is compounded by the impact of the first flood event. To show this, the following high rainfall figures occurred: The reason for the flooding around Lismore becomes apparent with the Wilson River peaking at a major flood level of 11.4 metres AHD during Wednesday. River levels continue to fall and are now below moderate flood levels. 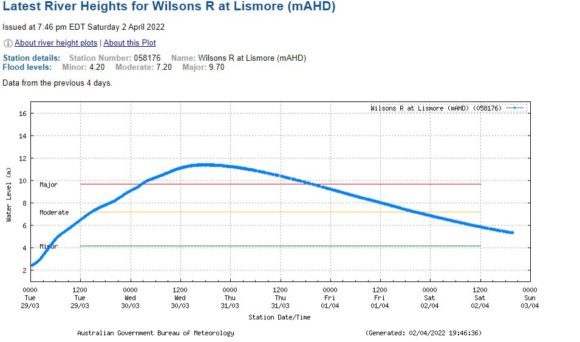 The photos attached to this post highlight heavy rain showers experienced around Sydney at times throughout the week. During Thursday rainfall eased to lighter showers commencing a clearing trend throughout Friday and into Saturday.

However, longer range forecasts appear to point to further rainfall from Wednesday which will only again hamper the recovery.