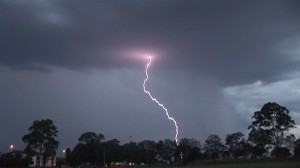 Wednesday afternoon, I was storm chasing. From Mt Parmassus lookout at Gundagai, I saw thunderstorm towers rise well to the NE towards Sydney. I made an attempt to catch them despite being some 350 km away. I drove non stop from Gundagai to Liverpool just in time for a lightning show at Liverpool. It took me 4 hours to drive that distance. I was rewarded with a storm that produced some great lightning flashes as shown.