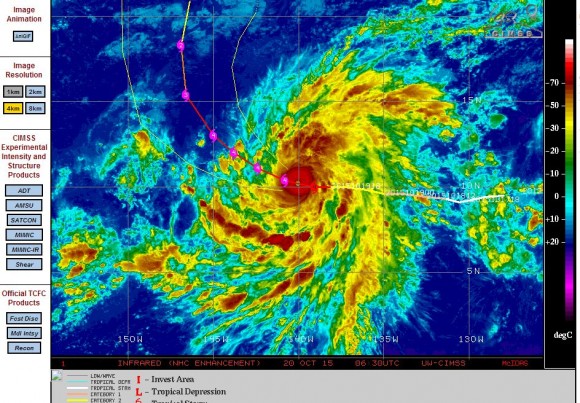 While Typhoon Koppu was making landfall across Luzon Island and Typhoon Champi was approaching its maximum strength over the north west Pacific Ocan, another storm - Hurricane Olaf was taking shape south east of Hawaii.

The named storm "Hurricane Olaf" developed over open ocean and rapidly intensified into a Category 4 storm. The storm transitioned and reached Category 4 status at latitude 10 degrees north and 139.1 degrees west. The storm is expected to curve north west then north over coming days then decay harmlessly over open ocean.

Over the next few days, the storm will approach Hawaii but according to forecast models, should not directly threaten the islands.

The storm has a classic spiral shape with bands of storms and a small core with a central eye. At the time of writing, the storm has peaked in intensity and according to the CIMSS ADT Tropical Cyclone Intensity Estimate scale, peak wind gusts appears to have reached 133 knots or 246 km/h. This shows an intense storm at its peak strength.

A feature of the named storms in this part of the Pacific Ocean for 2015 is that several have formed within the area but fortunately none have directly threatened Hawaii or passed over the islands.

While the storm is crossing an isolated area of the Pacific Ocean, a new threat looms for parts of coastal Mexico. A named storm called Patricia while currently a disorganised cluster of thunderstorms is forecast to gather strength and develop into a Category 1 hurricane over the next 2 days and make landfall over coastal south west Mexico with projected peak wind gusts of 80 knots or 145 km/h. It is expected that this storm will have a short life span.

The Pacific Ocean north of the equator is still active this late into October although the focus will soon turn to the southern hemisphere closer to Australian waters. In this regard, the Bureau of Meteorology has forecast a lower than average tropical cyclone season across all of Australia's waters and jurisdiction. This is in stark contrast to the northern Pacific Ocean where a very active season has just occurred. It appears El Nino weather phenomena may influence the outcome for the Australian waters. On average, at least 11 named storms occur but for 2015/16 due to El Nino effects, the odds have shifted for a less active season. This does not mean that a named storm will not cross the Australian coast. At least one (Minimum of one) storm is still likely to cross the coast although more likely later on during the season. Hence the forecast for Australian waters are:-