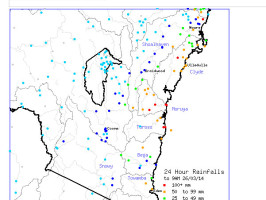 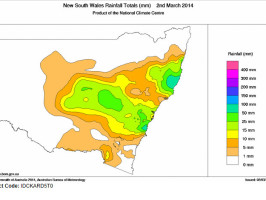 Rain and storms are possible this weekend as a trough moving through the state today re-establishes inland.Regions from near Coonabrabran through to Cobar and up to the Queensland border can expected widespread falls up to about 60mm or more. The intensity of the rain event at this stage is not consistent on all models including its location but it is looking somewhat positive for a rain event to occur in the northern inland of NSW. This needs to be watched and it should provide some much needed follow up rainfall for regions that experienced widespread rainfall over a week ago in mid-February.

Recent heavy rainfall has cause flooding in the region Longreach - one of the regions reporting one of the worst droughts on record. Some regions have reported in between 100 to 200mm of rain with some exceeding 200mm. A stagnant inland trough created the environment for widespread thunderstorm development. The lack of overall wind shear meant that the storms were slow moving or almost stationary and this assisted in the high totals.

Some regions have recorded their best rainfalls since 2009. The landscape has transformed from drought stricken and dusty to widespread and rising flood waters typical of the channel country. The recent rainfall has come as a great relief and a boost to desperate farmers. More storms are forecast for the coming days as the trough moves further inland. A deep low over the Gulf of Carpentaria may drift into the Northern Territory with a trough over western Queensland.