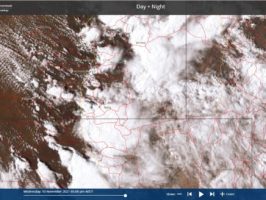 Another major rain event has impacted large areas of Australia during the period 10 to 12 November 2021. Rainfall accumulations have been significant in several areas and the area impacted is significant.

The most recent event appears to have been even more widespread and flooding has occurred in some areas. The rain episode commenced on the 3 and 4 November and has continued since with only intermittent spells of clear weather in between.

For the 24 hours to 9 am 11 November, the following totals were recorded within New South Wales:-

The Central West town of Molong received 59 mm being amongst the highest falls for the day.

During the same period, 9 to 36 mm fell across Sydney with the heaviest fall being 36 mm at Belrose on Sydney’s North Shore.

It is noted that while such rainfall was occurring across the east and north of the state, the far south west of New South Wales remained untouched.

For the week ending on the 11/11/2021, a vast area of Australia had received at least 25 to 50 mm with large areas of eastern New South Wales having received at least 50 to 100 mm from the event being accumulative totals. In addition to what has occurred across eastern New South Wales and Queensland, the area around and just to the west of Alice Springs had received upwards of 150 mm. Thursday evening and Friday morning,heavier rainfall again featured across much of New South Wales with the highest totals for the 24 hours to 9 am 12/11/2021 being:- Falls over 50 mm were common across the Hunter Valley and the city of Newcastle received between 60 and 88 mm. Falls of 50 mm or greater also featured around Bathurst and Orange in the Central Tablelands of New South Wales.

Widespread falls finally reached south west New South Wales and into North East Victoria where falls of 15 to 33 mm were common including 33 mm at Mt Buffalo and 29 mm in West Wodonga. Widespread and heavy rainfall impacted large areas of eastern Queensland where many areas received between 100 and 150 mm including Red Hill Alert 152 mm and Blackdown 132 mm. 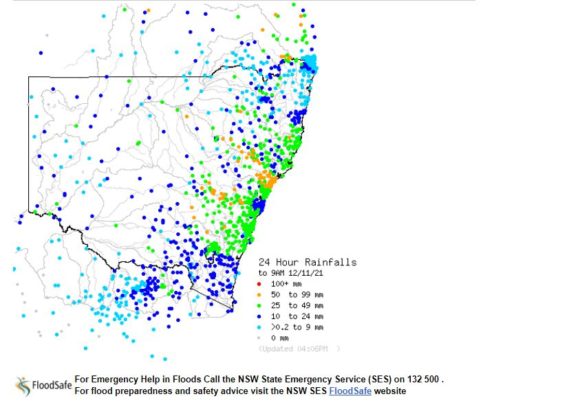 Even in Sydney, falls of 10 to 32 mm were common with higher totals in the west and south west. With totals accumulating, this made for a wet start to the day as shown in the attached photos. Scenes such as this have been common over the past several days interspersed with brief sunny spells. Some of the rain squalls passing overhead have had weak embedded thunderstorms within them as occasionally peels of thunder have been audible. The rain has now eased across Sydney although during the afternoon a brief heavy shower passed over Blacktown which included a single minor thunderclap being audible.

Enough rain has fallen over several days to cause flooding along a number of inland rivers. At the time of writing, the following rivers were in flood:-

3 - Cotton Weir on the Lachlan River near Forbes (Minor flooding).

5 - Minor flooding of various tributaries of the Gwydir River around Moree and Wee Waa in northern New South Wales. In north east Victoria, there are no rivers in flood but rain continues to fall which may change this in coming days. It appears that further rainfall will occur over the weekend across the south but this will ease as the weekend progresses.