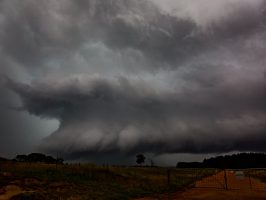 I had only a limited period to chase and could have chased the Mudgee supercell for it's entire life cycle but had to get home for kids. I literally pulled the plug as the storm began to organise! Great Les Kembrey got onto it!

The consolation prizes were rotating structures in and near Lithgow region as I ventured home.

By the way, I had forgotten to check my own forecast I do regularly and forgot about today's situation - thank you Karl lijnders for the reminder :) 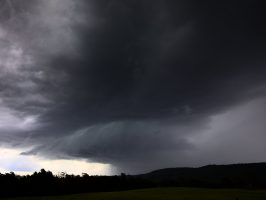 Storms in the Hunter Sunday. First storm was in Dungog but this was short lived and then Nicholas Moir, Linda Silmalis and I went south towards Paterson. Storms began to erupt but these were the real deal utilising the available CAPE. Unfortunately I lost Nick at this point and I chased a right mover that headed southeast towards Newcastle and another merged with it from west of Maitland. With this becoming impossible to chase I met Les Kembrey out near Singleton in pursuit of an isolated cell approaching from Muswellbrook. This was severe but moving into hard to chase hilly areas and had become outflow dominant. Another cell approached from Muswellbrook slightly north of the original cell and we gave chase unwinding our way back to near Singleton. This cell we just could not make it in front due to the access of the road. Finally we called it quits. As we spoke, we noticed yet another storm had split from this cell producing lightning. A nice LP structure though high based. Yet another high based LP structure approached but also weakened prior to Singleton. Finally I bid fairwell to Les and headed down the Putty Road with the occasional stop of some impressive mammatus display.