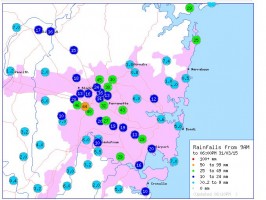 This cell intensified around the Auburn region into a heavy thundery shower.

Looking at news reports, SES personnel were called out to numerous flooding jobs at Dulwich Hill, Strathfield and Concord West, many relating to flooding and leaking roofs. On that note, the roof of the Council building where I work also had leaking issues.

This rain cell dropped some serious rainfall totals as seen in the attached plot including:-

Just before the event, a substantial but dark cloud base hung low over the region before unleashing the rainfall. At Homebush Bay weather station:-

This is reflective of the very low dark cloud base observed prior to the event. The event was largely over by 12.30 pm.