During Thursday 18 July, a significant rain / storm event crossed through inland NSW and much of Central and Eastern Victoria which is worth reporting. I am not  sure where the weather system formed but it appears the storm system developed across Western Central Victoria during the afternoon of 18 July.

Prior to the storm event temperatures across Victoria reached into the low 20s across many areas including Melbourne and considered to be unusually balmy for July.

The storm system passed over Melbourne mid afternoon but it only dropped aproximately 7 mm of rain across the CBD. During this storm event areas north of Melbourne were hit much harder. Embedded thunderstorms boosted rainfall totals in small areas. For example, Mangalore received 27 mm of rain in quite a short period of time and Shepparton had approximately 26 mm.

Looking at weather stations, this system appears to have sustained winds in the order of 50 km/h to 80 km/h (A gust of 80 km/h at Mangalore was recorded by the weather station).

By the time the storm system reached the NE highlands of Victoria rainfall totals were sharply increased and concentrated. The result was a significant melting of the snow cover. At Mt Hotham 73 mm of rain was recorded but the weather station did record winds in excess of 120 km/h earlier. Another intense fall of 82 mm fell at Falls Creek close by and 70 mm fell at nearby Chesthunt. Incredible the system weakened once it hit the alpine areas and large rain shadows occurred in areas to the east.

At the same time, through inland NSW, a number of embedded thunderstorms occurred with this system and by 8 am Friday morning the GPATS lightning tracker had shown some 57,200 lightning strikes / flashes across a band of the state stretching from Lake Hume near Albury all the way towards the north west and Broken Hill. Albury was hit with 34 mm of rain and Thredbo had 62 mm.

Looking at the Border Mail 19/7/2013, a 50 year old woman driving to work is lucky to be alive after she drove into floodwaters near Wodonga. This system did create some minor to moderate flooding on the Kings River and flood warnings were issued for the Mitta Mitta, Ovens and Kiewa Rivers. This was made worse due to the snow melt that had occurred.

Since Friday night significant snowfalls are now replacing the snow lost and Mt Hotham up until 9 am Saturday morning had another 36 mm of precipitation mostly in the form of snow. 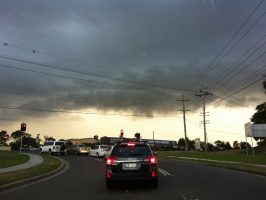 A storm produced flash flooding as 15mm fell in 15 minutes at North Ryde! It is unusual for storms to occur during winter so this storm cell was a surprise particularly its intensity! The storm was spawned near the Riverstone Schofields corridor and intensified as it moved over Baulkham Hills Castle Hill district finally dumping torrential rain over the North Ryde area. The storm then drifted east and gradually weakened. A boy was swept into a creek or river at the height of the storm.